How To Test The Igniter, Ignition Coil Accord, Civic, CRV, and Odyssey

TEST 6: Testing The Igniter For The Triggering Signal 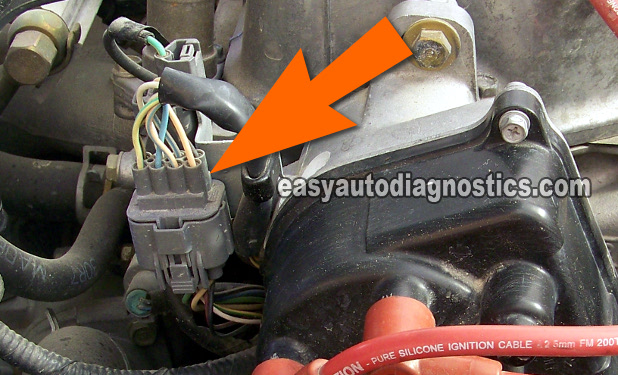 In this test you're gonna' check to see if the ECM (Electronic Control Module = Fuel Injection Computer) is generating and sending the igniter's triggering signal.

As in the previous tests, the tests in this section are performed with the distributor connected to its two connectors. This last test will help you confirm if the igniter (ignition control module -ICM) is bad or not.

NOTE: You can use a digital multimeter or an LED light to test the igniter triggering signal, but you CAN NOT use a test light. If you use a multimeter, it has to be able to read Hertz (Hz) frequency since the signal has to be measured in Hertz. The following test assumes that you're using an LED Light.

CASE 1: The LED light flashed ON and OFF while the engine was cranking. Then the ECM is generating and sending the triggering signal to the igniter (ignition control module). Replace the igniter.

Here's why: Up to this point you have verified that:

... So then, taking all of the above into account the igniter HAS to create and send the switching signal for the ignition coil to activate and start sparking... Since it isn't, then you and I can conclude that the igniter is bad and needs to be replaced.

CASE 2: The LED light DID NOT flash ON and OFF while the engine was cranking. Then the ECM is NOT generating and sending the triggering signal to the igniter (ignition control module). The most likely causes are either one or several of the cam/crank position sensors within the distributor have gone bad or there's an open in this circuit.

Although testing the two above mentioned causes are beyond the scope of this article, you have now eliminated the following as the causes of you Honda Accord's, or Civic's, or Odyssey's No Start:

Hondas are some of the easier cars to work on and troubleshooting them isn't complicated either, so if this tutorial helped, checkout some of these others:

How To Find A BAD Fuel Injector (Case Study)


"My wife and I were happy for 20 years. Then we met." Rodney Dangerfield